Activities At The Lodge...

Crystal clear waters of Lesotho provide anglers with plenty of opportunity to catch fish in the trout filled Rivers.

Reward yourself with the sighting of the rare Bearded Vulture.

The Mountain Kingdom with it’s rugged terrain is a favourite playground for the 4x4 enthusiasts, quad bikes and bikers.

A satellite television in the private lounge will ensure you don’t miss out on any sport events. A well stocked private bar and a pool table can help you pass time on those very cold days.

June, July and August bring the most satisfaction to avid skiers. Snow is natural and depends entirely on weather conditions. Mahlasela Hill (the ski slope at Afri-ski), is 16km from the Lodge and has the longest known run of 2km in Southern Africa.

During winter months, rivers and waterfalls ice up. The iced river ponds are a great playground for kids and adults alike to play broom hockey.

A mountaineers dream. We do not offer guides or hike trails.

Activities Near The Lodge...

The Katse and Muele Dams both have very interesting tours of the dam walls. An eerie experience is to take a tour in the dam wall, and to know that behind those walls are millions of tons of water.

The Letseng Diamond mine, and the Kao Diamond mine are nearby located. Letsend is about 44km away from Oxbow.

There are mysterious caves used by the San Bushmen in the area near Qalo and Sekubu. The town is close to the Caledonspoort Border Post, and the plateau to the east of the town is a delightful picnic stop on the way to Oxbow.

We have botanical groups from Canada, UK, US and EU that come every year to do research. Beautiful alpine flowers and mountain shrubs.

This site is passed going to Oxbow Lodge from the Caledonspoort Border post. Lesotho is rich in relics of it’s prehistoric past, especially of early dinosaurs and of the first primitive mammals to walk the earth. Fascinating for the non-specialist visitor are many dinosaur track ways – sets of footprints preserved in sandstone. One of the best examples is at Subeng Steam, about 5 miles north of Hlotse, and easy walking distance from the main Hlotse, Butha-Buthe road. The track way features the footprints of several different dinosaurs, from the period at the end of the Triassic era, some 180-200 million years ago. These were early ancestors of the creatures that feature in the film Jurassic Park. 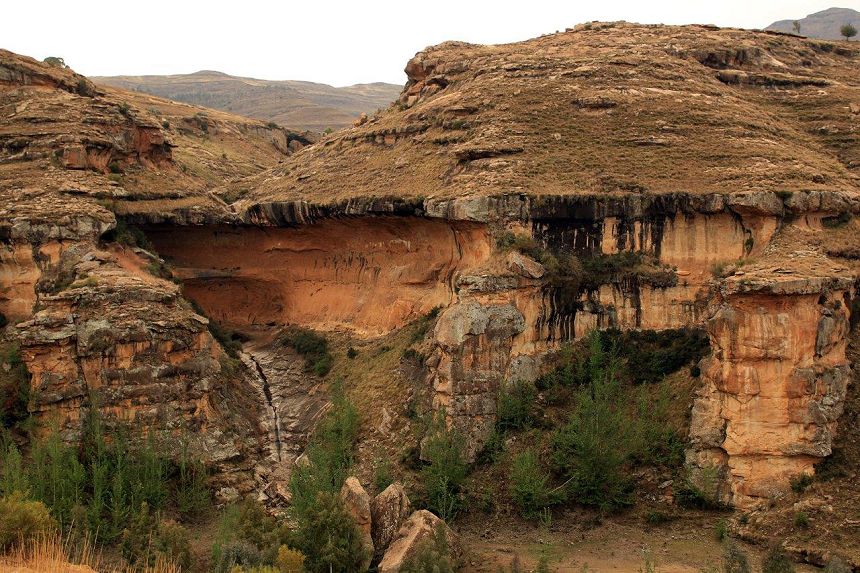